The Hanoitimes - Existing shortcomings and problems will be addressed in the next five-year period in order to drive Vietnam to be a strong and prosperous country by 2045, Prime Minister Nguyen Xuan Phuc has said.

The Vietnamese Communist Party has affirmed its comprehensive leadership role over the past 91 years, successfully implementing the major political missions of the country, Prime Minister Nguyen Xuan Phuc has said.

Mr. Phuc was speaking at the ceremony to announce the opening of the 13th National Party Congress held in Hanoi today, which gathers 1,587 delegates representing nearly 5.2 million party members nationwide.

The government leader said the 13th National Party Congress is not only the most important political event in 2021, but also a very crucial  milestone in the development of the Party and the country in the coming time.

He said the congress is taking place when entire Party, people and army have successfully carried out many goals and tasks identified in the Resolution of the 12th Party Congress of the Party, creating many outstanding marks and contributing to the country’s great and historic achievements of 35 years of Doi moi (Renewal), 30 years of implementing the 1991 Political Platform, 10 years of implementing the 2011 Platform, and in the implementation of the 2011-2020 Socio-economic Development Strategy.

“We also frankly acknowledge the shortcomings and problems that need to be solved in the next five-year period, realizing the ambition to drive Vietnam to be a strong and prosperous country by 2045,” Mr. Phuc said.

“In that context, the ongoing congress bears a great historical responsibility for our fatherland, nation and people, not only in the next five-year period but also for the coming decades and for future generations of the country,” he added.

Mr. Phuc affirmed that with the right orientations, strong development aspirations and high political determination, the entire Party, people and army will definitely gain new development achievements for the sake of a prosperous and happy Vietnam, walking abreast with the great powers and successfully realizing the wish of President Ho Chi Minh and the entire nation.

Themed “Solidarity – Democracy – Discipline – Creativeness - Development,” the 13th National Party Congress is the mettle, unyielding will and determination of the entire nation to progress forwards, gaining the goal of wealthy people, strong country and a democratic, equal and civilised society. 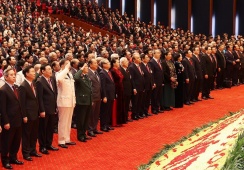