Actions advised for Vietnam to lure investors amid energy crunch

The Hanoitimes - Legal or regulatory obstacles with a low level of certainty and issues concerning grid access for private projects, are the most pressing to private investment.

Experts have recommended the Vietnamese government to remove regulatory obstacles for domestic and foreign investors in the energy sector to avoid energy insecurity caused by inadequate infrastructure due to low private investment.

In a working paper released recently, the experts said that given the new position of public finance, though official development assistance and preferential loans were previously the major sources of energy investment, they have been reduced significantly.

“The country will see a threat to energy security if sufficient capital for infrastructure and new energy, such as renewable energy (RE), cannot be raised,” remarked the experts.

Injecting capital into the energy sector will enhance electricity security by reducing the increasing reliance on imports and a lack of energy generation diversification, while simultaneously unlocking the potential for RE deployment in the country.

“Energy insecurity is an apparent threat to the Vietnamese economy without the timely involvement of the private sector, as forecasts indicate that this type of capital will account for 75% of the capital required in the power sector until 2030,” stressed the experts.

Among the barriers that are hindering the participation of the private sector, the experts said that legal or regulatory obstacles with a low level of certainty and issues concerning grid access for private projects, are the most pressing.

“Rather than just focusing on the financial incentives, such as the feed-in-tariff, which has become the agenda in the country with a debate related to the rate and how to distribute it, addressing such concerns is more important,” the experts noted.

They explained that an energy sector policy that encourages the involvement of the private sector should shift incentives to enabling countries to take advantage of the carbon finance.

Moreover, the country should create a competitive energy market more quickly by speeding up the reform and restructuring of the energy market.

“The functionality of the wholesale and retail electricity market, to which the government is committed, is fundamental for the long-term investment consideration of the private sector, particularly the foreign one,” the experts noted.

Besides the regulatory barrier, the government should consider employing an innovative contract, such as a direct power purchase agreement. This type of contract allows private electricity buyers and sellers to sign an agreement directly for electricity transactions.

In addition, it is also necessary to improve the functionality of the domestic financial market, the experts recommended.

To attract more private sector involvement in energy development, particularly renewable energy, the government should use key facets to enhance the function of the domestic financial market.

“These include developing the domestic bond market as a basis for long-term lending and a stepping stone to green bond issuance and strengthening the capacity of financial and banking institutions in funding renewable energy energy projects that require long-term loan access and expertise in power sector credit appraisal,” they said.

Other solutions include utilizing the spillover effect of the energy supply in the form of a tax return to the private sector.

According to the experts, the government often regulates electricity tariffs, which makes it difficult for private financial institutions, such as pension funds or insurance companies, to finance energy projects. Hence, it is necessary to utilize the spillover effects originally created by energy supplies and refund the tax revenues to the investors in energy projects. 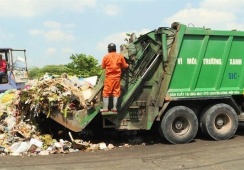 Hanoi to turn most waste into energy in 2021