The Hanoitimes - This transaction is expected to close in late 2021 or early 2022, subject to customary approvals, including from the Vietnamese Government and the minority partners in the Mong Duong 2 plant.

The AES Corporation (NYSE: AES), a US power company headquartered in Virginia, has signed an agreement to sell its entire equity interest in the 1,242-MW Mong Duong 2 coal-fired power plant in Vietnam to a consortium led by a US-based investor, who has not been disclosed.

According to the agreement, the new investors will own 51% equity interest in Mong Duong 2 in Mong Duong Ward in the northern province of Quang Ninh's Cam Pha City.

“We have had a very positive experience in developing, building and owning Mong Duong 2 plan. Vietnam remains an important growth market for AES, where we look forward to contributing to the country’s transition to a more sustainable energy future,” said Mr. Andrés Gluski, AES President and Chief Executive Officer.

In line with its global strategy to invest in renewables and liquified natural gas (LNG) infrastructure in Vietnam, the corporation continues to make good progress on the development of the 450 TBTU Son My LNG terminal with PetroVietnam (PVN) and the 2,250-MW Son My 2 combined cycle gas power plant, Mr. Gluski added.

Among the total equity interest in Mong Duong 2, Posco Energy Company Limited owns 30% and Stable Investment Corporation, a subsidiary of China Investment Corporation, owns the remaining 19%. The construction of Mong Duong 2 was completed in 2015 under a Build-Own-Transfer (BOT) contract, with a 25-year Power Purchase Agreement (PPA) with Vietnam Electricity (EVN), a State-owned utility.

Besides the Mong Duong 2 project, AES in collaboration with local investors is also developing a LNG gas power project chain in the central province of Binh Thuan in parallel with research and development of solar energy projects with the aims to partially solving the energy shortage in the South of Vietnam. 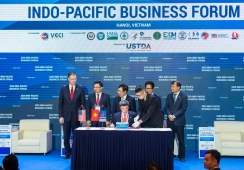