The Hanoitimes - Outside of official funding, Vietnamese nationwide have contributed to many relief funds, big and small, to help flood victims in central Vietnam.

After days of being battered by adverse weather conditions, provinces in central Vietnam need all the help they can get, in-kind and in-cash, from fellow citizens.

According to the Central Steering Committee for the Prevention and Control of Natural Disasters, from October 6 to 22, the natural disaster resulted in at least 111 deaths and 22 people missing. Some 178,000 homes, 7,000 hectares of crops have been damaged and 700,000 livestock animals have died.

On October 19, Prime Minister Nguyen Xuan Phuc chaired a meeting of the central government on the flooding and landslides in central Vietnam and how disaster relief efforts are going.

At the government meeting, PM Phuc approved a proposal to provide each of the five provinces with 1,000 tons of rice. He ordered the Ministry of Finance to deliver the rice aid on the same day, as well as mobilize vessels and equipment to assist with relief efforts.

The PM also decided to support each of the five most-affected provinces with VND100 billion (US$4.3 million), sourced from the Central Reserve Fund.

Meanwhile, Vice Chairwoman of the National Assembly Tong Thi Phong visited and presented gifts worth US$22,000 to Huong So commune in Thua Thien-Hue province.

According to Defense Minister General Ngo Xuan Lich, his ministry has prepared helicopters in Hue, Danang, and Hanoi for rescue missions and delivery of aid to isolated areas.

“The army is always prepared for any circumstances. The defense businesses and border guards are on duty around the clock to rescue flood victims. Every military unit is responsible for the safety of civilians near tits barracks,” said General Lich.

Besides government assistance, Vietnamese from across the country and overseas have contributed to many relief funds to help flood victims. Long lines of vehicles are seen on roads in the central region bring aid, ranging from rice, fresh food, packed food, to clothes and money.

Most notably, pop singer Thuy Tien confirmed earlier this week that she had raised over VND100 billion (more than US$4.3 million) from donations across the country over one week. Thuy Tien was among the first celebrities to travel to the affected areas to distribute cash and donations.

On October 18, Vietnam Airlines, Pacific Airlines, VASCO and Bamboo Airways announced that they would waive transportation fees for relief goods from Hanoi and Saigon to localities in central Vietnam.

Hanoians have been gathering for several days to cook chung cakes (Vietnamese square glutinous rice cake stuffed with meat and beans) for people suffering from the historic floods in central Vietnam.

Besides, people in Chuyen My commune (Phu Xuyen district) and Trung Hung ward (Son Tay town) are also cooking chung cakes to support the poor and flood-affected victims in the central region.

They work around the clock to ensure their chung cakes will reach their fellows in central Vietnam as soon as possible.

As of October 22, more than 8,000 Chung cakes have been made and sent to flood victims in the central provinces of Thua Thien - Hue, Quang Binh, Quang Tri, and Ha Tinh. 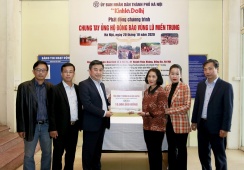 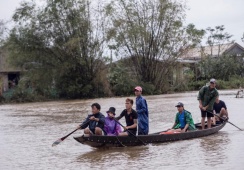 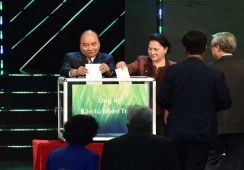