Another Covid-19 patient recovers and discharged from hospital

The Hanoitimes - The man, identified as “patient 18”, was allowed to go home after having tested negative for the coronavirus three times.

A 27-year-old man has fully recovered and was discharged from hospital on Friday morning after two weeks under treatment, becoming the first among 69 active patients to be cured.

The man, identified as “patient 18”, was allowed to go home from Ninh Binh Provincial General Hospital after having tested negative for the coronavirus three times.

He arrived in Daegu city, the epicenter of South Korea, on February 17 and returned to Vietnam on March 4. He was taken to a military school in Ninh Binh province for quarantine upon arrival.

He will have to self-isolate at home for two weeks under the supervision of local health workers.

Before him, 16 Covid-19 patients were cured and discharged by February 16.

During more than three weeks Vietnam reported no new cases of coronavirus infection until March 6 when the 17th case in the country was found in Hanoi.

Ten other active patients have tested negative for first and several times, including patient No.17. However, patient No.17’s aunt, aged 64, is in a critical health status.

Vietnam today [March 20] has reported two new infected people who are nurses working at Bach Mai Hospital in Hanoi, taking the toll of infections to 87. 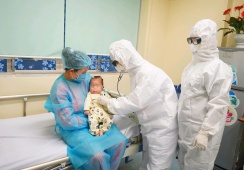