Russia has been a full dialogue partner of the Association of Southeast Asian Nations (ASEAN) since 1996.

Representatives of ASEAN member states and Russia have discussed measures to reach the finalization of the ASEAN-Russia Comprehensive Plan of Action for 2021-2025.

Both sides underscored the necessity to accelerate the action plan at the 19th meeting of the ASEAN-Russia Joint Cooperation Committee (ARJCC) held virtually on March 30.

They said the action plan creates an important basis for the bilateral cooperation in the next five years, preparing for celebrating the 30th anniversary of the ASEAN-Russia relations and the 25th anniversary of dialogue relations between ASEAN and Russia (1996-2021).

Russia affirmed that ASEAN is one of its leading partners, vowing to support the bloc in building the community and strengthening the ASEAN Centrality, as well as enhancing the regional connectivity and narrowing the development gap.

Earlier this month, the both sides revealed the possibility of join naval exercise in the near future.

As of February 28, the ASEAN-Russia Dialogue Partnership Finance Fund (ARDPFF) has a total amount of US$8.14 million with an annual contribution of US$1.5 million from Russia. 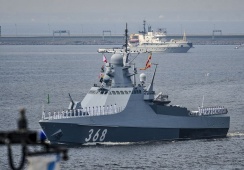