The Hanoitimes - Being signatories of the world's largest trade pact, ASEAN+3 nations are expected to maintain the supply chain in the post-pandemic era.

The ASEAN Plus Three (APT), which comprises of ten Southeast Asian countries and three Northeast Asian partners namely China, Japan, and South Korea, have agreed to boost economic connectivity basing on the effective implementation of trade agreements among them.

The RCEP covers APT, New Zealand and Australia. India withdrew from its negotiations in November 2019 due to concerns over trade imbalances.

Vietnam’s Prime Minister Nguyen Xuan Phuc, who chaired the 23rd APT Summit in Hanoi on November 14, emphasized the group’s top priority is to solve impact caused by Covid-19 and step up sustainable recovery.

He called on China, Japan, and South Korea to share experiences in epidemiological research and public health emergency preparedness, and support the implementation of the ASEAN Comprehensive Recovery Framework.

The countries all agreed to make more joint efforts in controlling the pandemic and minimizing pandemic impacts in the spirit of the Joint Statement of the Special ASEAN Plus Three Summit on Covid-19 held in April, to which they reaffirm commitments to keep markets open for trade and investment, and enhance cooperation among the APT.

The role of China, Japan, and South Korea was once again affirmed when they announces donations to the ASEAN Covid-19 Response Fund and the ASEAN Regional Reserve of Medical Supplies. Leaders of the three countries pledged to contribute US$1.3 million each to the fund and the reserve.

Speaking at the summit, leaders of China, Japan, and South Korea emphasized the role of multilateralism and the ASEAN Centrality in promoting peace and cooperation in the region.

China’s Premier Li Keqiang believed that the mutual support in the battle against the pandemic shows the most visible solidarity and friendship in economic recovery and connectivity.

In addition, the countries agreed to make more efforts in dealing with non-traditional security like human trafficking, hi-tech scams, terrorism, and drug trafficking; stepping up the development of digital economy and creative growth.

In 2019, trade turnover among ASEAN+3 reached US$890 billion, accounting for 31.6% of ASEAN’s total trade. Investment from China, Japan, and South Korea into ASEAN hit US$32 billion, making up 19.9% of the investment inflows into the bloc, statistics by the Vietnamese government showed.

The three countries have significantly contributed to the building of the ASEAN Community, the implementation of the Master Plan on ASEAN Connectivity (MPAC) 2025, and the performance of the Initiative for ASEAN Integration (IAI) that helps ASEAN's newer member states implement ASEAN commitments and agreements. 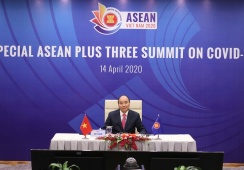