The Hanoitimes - The CEO admitted that she sent an attached file having the illegal nine-dash line.

CEO of Bayer Vietnam has been summoned and fined for having disseminated a Chinese map with the unlawful nine-dash line.

Lynette Moey Yu Lin will be fined between VND25 (US$1,086) and VND35 million (US$1,521) for sending a document on Covid-19 – lessons from China with an attached file containing the Chinese map with the nine-dash line to the company’s staff on April 27.

When working with authorities in Vietnam’s Ho Chi Minh City on May 15, Lynette admitted to having sent the attached file of 19 MB and has made effort to retrieve the document.

The news on the spread of the illegal map has immediately sparked wrath among Vietnam netizens who called for dismissal of Lynette Moey Yu Lin, the company’s official apology, and boycott of Bayer products.

So far, Hanoi has strongly opposed China’s self-claimed nine-dash line that covers Vietnam's Hoang Sa (Paracel) and Truong Sa (Spratly) in the South China Sea, rejecting the Chinese illegal map in all cases both in Vietnam and abroad.

In 2016, a panel in The Hague rejected the legality of China’s claim to waters within a “nine-dash line” that appears on official Chinese maps and encircles as much as 90% of the South China Sea.

Dr. Zachary Abuza, professor at the National War College in Washington, DC, said the Permanent Court of Arbitration (PCA) ruled that the nine-dash line has no basis as per international law and that the historical rights claimed by China were “extinguished” by the ratification of UNCLOS.

In 2019, Vietnam fined several companies for their “accidental” dissemination of the nine-dash line.

“The firm’s violation is very serious, so the inspectorate decided to exceed the maximum fine frame to discipline them,” VnExpress cited Tu Luong, deputy director of Ho Chi Minh City’s Department of Information and Communications. 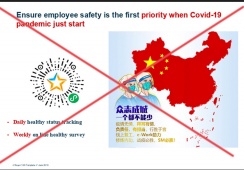 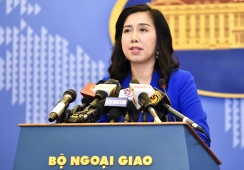 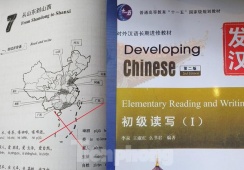