Chu Van An High School, also known as Bưởi School (before 1945), is one of the oldest and most prestigious public schools in Hanoi.

Established by French colonial authorities in 1908 as High School of the Protectorate, this is one of the oldest institutions for secondary education in Indochina.

Despite the initial purpose of the French government for this school which was training native civil servant for their colonial apparatus, many Vietnamese students at Bưởi School had become opponents of the French colonial regime. 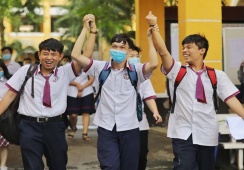