The Hanoitimes - The 300-page book is launched on the 60th anniversary of the establishment of diplomatic relations between Vietnam and Cuba.

A book on late Cuban President Fidel Castro and the Vietnam-Cuba friendship has been launched as part of activities to celebrate the 60th anniversary of the diplomatic relations between Vietnam and Cuba.

The bilingual book in Vietnamese and Spanish entitled "Fidel Castro and Vietnam - Unforgettable Memories" was features a compilation of over 30 articles narrating memories and thoughts of Vietnamese Party and State leaders, diplomats, writers and journalists about the love to Vietnam by late Cuban President Fidel Castro and the Cuban people.

At the launching of the 300-page book, Ms.Truong Thi Mai, head of the Party Central Committee’s Commission for Mass Mobilization, said the book is a valuable gift to Vietnamese young people and precious document for Cuban generations about the long-lasting friendship.

In her speech at the ceremony, Cuban Ambassador to Vietnam Lianys Torres Rivera said the two countries have maintained an exemplary political relations since the establishment of the diplomatic ties.

With the support of two country’s leaders and peoples, the long-standing brotherhood between Vietnam and Cuba will last for long.

“Cuba and Vietnam will continue to develop their comprehensive cooperation on the basis of the special political bonds between the two countries,” she said. 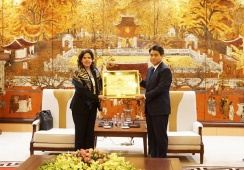