Cambodia called on to ensure welfare for people of Vietnamese origin

About 180,000 people of Vietnamese origin are living in Cambodia, the largest ethnic minority group in the country.

Vietnam has called on Cambodia to ensure well-being to people of Vietnamese origin following the eviction plan of floating villages on Tonle Sap River.

Vietnam expected that Cambodia’s authorities have had suitable socio-economic solutions for the residents who are subject to the Phnom Penh City Hall’s relocation plan that was announced early this month.

On June 2, Phnom Penh’s authorities announced a plan to move out floating houses and unregulated structures along the Mekong and Tonle Sap River within one week.

The local government said they would dismantle or relocate the floating houses, fish farms, and boathouses or any other unregulated and illegal structures on the river surface, the Khmer Times reported.

The City Hall attributed the relocation to a serious impact on the waterways, ecosystem, water flow, environment, the beauty of Phnom Penh, and the health of people who use unclean water.

About 700 families, many of whom are of Vietnamese origin, are subject to the eviction.

“Vietnam understands Cambodia’s socio-economic policies and the need to protect its environment, but we also hope that the relocation will follow a reasonable and practical roadmap, and new settlement areas will be arranged with essential infrastructure to help people soon settle down,” Hang said.

According to the spokesperson, Vietnamese agencies and mission have worked with the local government on this issue.

Son asked Cambodia to continue paying attention to and solving the legal status for people of Vietnamese origin to make sure that the displaced people would benefit from fundamental needs and resettlement plans.

Earlier on June 4, Vietnamese Ambassador to Cambodia visited people of Vietnamese origin in the displaced area. The MoFA’s State Committee for Overseas Vietnamese and the Vietnamese Embassy in Cambodia have suggested that Cambodia creates favorable conditions and takes practical measures to support the residents.

Cambodia’s Tonle Sap is the largest freshwater body in Southeast Asia. The Tonle Sap contributes over half of the country’s fish production of 400,000 tons per year. More than 1.2 million people in the Tonle Sap area alone depend on fishing for their livelihoods, according to the Food and Agriculture Organization (FAO).

Vietnamese is the largest ethnic minority group in Cambodia with more than 180,000 people, according to the Cambodian government. 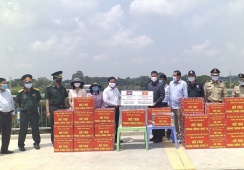 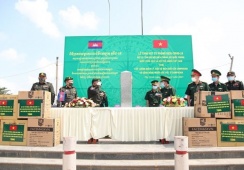 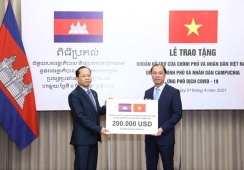