Hanoi demands Beijing to end violations and respect its waters.

Vietnam on March 25 demanded China to stop violating Vietnamese waters in Grierson Reef in Spratly Islands following the docking of more than 200 Chinese boats in the island earlier this month.

Vietnam wants China to end violations, respecting Vietnamese waters and showing goodwill in enforcing the UN Convention on the Law of the Sea (UNCLOS) 1982, the Declaration on the Conduct of the Parties in the South China Sea (DOC), and refrain from complicating the situation and troubling the negotiations of the Code of Conduct of Parties in the South China Sea (COC), Spokesperson Le Thi Thu Hang of Vietnam’s Ministry of Foreign Affairs said at a press conference.

Manila slammed China’s “provocative” deployment of more than 200 vessels in the South China Sea, asking for the ships to be recalled from the region. 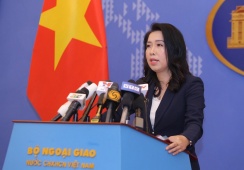