Trampling and ignoring international law, China has brazenly announced the establishment of two administrative districts in Vietnam's Paracel and Spratly islands in the East Sea, and formally named 80 geographical features there.

Once again, China proves itself a stubborn and incorrigible troublemaker in the East Sea (internationally known as the South China Sea). It is China's typical tactic to capitalize on the world being distracted by the pandemic to pursue its dark pretension and carry out activities of intentionally violating Vietnam's sovereignty and territorial integrity in the East Sea, posing threats and dangers for peace, security and stability in the region.

Trampling and ignoring international law, China brazenly announced the establishment of two administrative districts in Vietnam's Paracel and Spratly islands in the East Sea, and formally named 80 geographical features there.

China's such moves are dangerous and should be strongly condemned worldwide not only because they totally trample and ignore international law, but also because of the fact that China carries out such moves in the time the whole world is focusing on the fight against the coronavirus pandemic which broke out in China some months ago. They once again showed that China spares no chance to intensify its territorial expansionism in the East Sea, to change the status quo and cement its wrongdoings there. They once again demonstrate unequivocally that China certainly despises its own commitments to the Declaration on Conduct of the Parties in the South China Sea (DOC) and seemingly does not really intend to sign the Code of Conduct of the Parties in the South China Sea (COC) now still being negotiated between ASEAN and China.

Another goal of China with those dangerous and internationally condemned acts at a time when the whole world is struggling with the pandemic might be to picture itself as the country which is able not only to successfully combat the pandemic but also to act strongly everywhere.

Any activity in the Truong Sa (Spratly) and Hoang Sa (Paracel) Islands must be authorized by Vietnam. Therefore, Hanoi strongly demands Beijing fully respect Vietnam's sovereignty and territorial integrity and to refrain from actions which could escalate tensions, further complicate the situation and undermine peace and stability in the East Sea and the region. 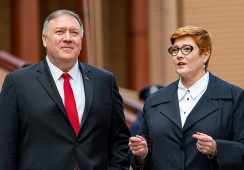