The Hanoitimes - Vietnam said China’s recurrent exercises harm the negotiations on the Code of Conduct of Parties (COC) in the South China Sea.

Hanoi has blamed Beijing for infringing Vietnamese sovereignty in the South China Sea by conducting consecutive military drills from August 23 to August 30.

“China’s repeated military excercises in Vietnam’s Hoang Sa (Paracels) have violated Vietnamese sovereignty over the islands, going against the Declaration on the Conduct of Parties in the South China Sea (DOC) and complicating the situation that will affect the negotiations on the Code of Conduct of Parties (COC) in the South China Sea and the maintenance of peace, stability, and cooperation in the East Sea,” Spokesperson Le Thi Thu Hang of Vietnam’s Ministry of Foreign Affairs said in a statement Wednesday.

China’s Maritime Safety Administration said during the drills, outside vessels should steer five nautical miles (9.26 kilometers) clear of the drill area, but gave no details.

Meanwhile, China announced late last month that it had held drills in the South China Sea involving long-range bombers and other aircraft.

The Chinese People's Liberation Army (PLA) has announced four concentrated military drills across three major sea regions in the coming days, following a recent announcement of consecutive, realistic drills in the Taiwan Straits and at its north and south ends aimed at deterring Taiwan secessionists and the US, China's Global Times reported on August 23.

Emeritus Professor Carl Thayer at the University of New South Wales, Canberra, said the naval exercises are “part of an action-reaction cycle” as they are primarily a response to recent US Navy exercises in the Philippine Sea and South China Sea and the ongoing Rim of the Pacific Exercises in the waters around the Hawaiian islands on August 17-31 that China was not invited to participate in.

Vietnam said it has full historical evidence of the sovereignty over Paracels that it administrated for centuries before China invaded the archipelago in 1974. 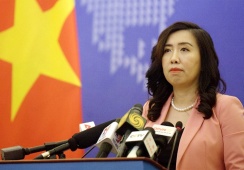