The Hanoitimes - Hanoi said it wants to convey a message in ASEAN and the region on the protection of fishermen’s legitimate rights and interests.

Vietnam is on the lookout for China’s possible use of weapons in waters that Beijing claims to be under its jurisdiction.

When asked at a press conference Thursday to comment on information saying that China Coast Guard might be allowed to chase away foreign vessels with weaponsm Deputy Spokesperson Duong Hoai Nam of Vietnam’s Ministry of Foreign Affairs reaffirmed that Vietnam has full legal basis and historical evidence to assert its sovereignty over Truong Sa (Spratly) and Hoang Sa (Paracel) archipelagos that Beijing also claims.

He reiterated Vietnam's stance that all disputes must be peacefully resolved in accordance with international law, including the 1982 UN Convention on the Law of the Sea (UNCLOS).

The Vietnamese diplomat mentioned the discussion of equal and humane treatment toward fishermen of ASEAN and China in the South China Sea earlier this week.

“We want to convey a message to regional countries and ASEAN member states on the protection of legitimate rights and interests of Vietnamese fishermen and those who fish in the waters under their countries’ sovereignty, sovereignty rights and jurisdiction,” Mr. Nam said.

Earlier on Wednesday, Chinese National People’s Congress released a draft legislation that would allow the use of arms against foreign vessels operating in areas under China’s jurisdiction and that Beijing deems the operations to be illegal and if the foreign vessels defy orders to stop, according to NHK.

The draft is released at a time when Chinese law enforcement vessels have harassed regional countries’ vessels, including Vietnamese fishing boats.

The latest harassment was reported on April 2, 2020 when a Vietnamese fishing boat was rammed by Chinese vessels in Phu Lam Island (Woody Island) in the Paracels that belong to Vietnam.

The move also comes as Chinese patrol ships continue to enter Japan's territorial waters off the coasts of the Senkaku/Diaoyu Islands, sometimes chasing Japanese fishing boats operating in the waters. 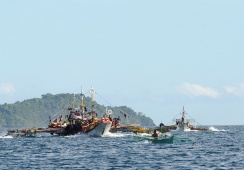