The third-largest Chinese state oil firm is said on the forefront of China’s sovereignty combat against the other countries.

The comments were made after the US early this month added China’s third-largest national oil company CNOOC to a blacklist of alleged Chinese military companies that have supported Beijing’s expanding assertion in the resource-rich sea.

CNOOC’s involvement in the South China Sea is seen as an extension of China’s influence in the 3.5 million-square-kilometer waterway, VOA cited Alexander Vuving, professor at the Daniel K. Inouye Asia-Pacific Center for Security Studies in Hawaii.

“CNOOC is not just a company, but it’s also on the forefront of China’s sovereignty struggles, sovereignty combat, against the other countries,” Vuving said.

CNOOC is the first oil and gas company on the US black list that already has 35 Chinese companies from aerospace, chemical, construction, energy technology, and telecommunications sectors.

The listing will not take effect until it is published in the Federal Register.

According to famous expert on Southeast Asia studies – Emeritus Professor Carl Thayer at the University of New South Wales, CNOOC is said to have played a direct role in asserting China’s claims in the South China Sea, most prominently by operating the Hai Yang Shi You 981 movable oil rig that kickstarted a standoff between Vietnam and China in 2014.

Blacklisting CNOOC is the most recent action the US has taken to level the playing field between American companies who are compliant with US rules and Chinese companies who flout the rules in accessing the American market, Prof. Thayer said.

The blacklist aims to limit the ability of Chinese companies with military connections operating in the US from gaining access to emerging dual use (civilianmilitary) technologies.

The blacklisting aims to prohibit American investors from buying securities in blacklisted companies from November 2021.

Prof. Thayer said the blacklisting of CNOOC will have little impact on its offshore oil operations, including the South China Sea as very few US investors have purchased CNOOC securities.

Vuving said he thinks the US sanctions could hurt CNOOC mainly “in terms of prestige.”

That opinion is shared by Mark Valencia, of China’s National Institute for South China Sea Studies. He wrote in a recent Asia Times commentary the U.S. sanctions could reduce CNOOC’s stock value and “severely damage the company’s reputation.” 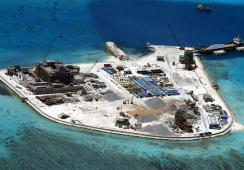