The Hanoitimes - ASEAN and China have negotiated on such a COC since 2002 with a view to reaching law-abiding rules on the South China Sea, but the coronavirus outbreak has delayed the talks.

Philippines Foreign Affairs Secretary Teodoro Locsin has stated that ASEAN and China will resume delayed negotiations on the Code of Conduct in the South China Sea (COC) by the end of this year.

“As the Philippines is the next host, we will meet face to face no later than November,” Secretary Locsin said at the ASEAN-China Ministerial Meeting on September 9 via teleconference.

An effective and substantive COC would contribute to regional peace, security and stability. As the country coordinator, the Philippines aspired to continue the progress, he added.

At his speech in the Opening session of the ASEAN Foreign Ministers's Meeting on Wednesday morning, Vietnamese Prime Minister Nguyen Xuan Phuc said regional geo-political and geo-economic landscape, including the South China Sea, are witnessing growing volatilities that are detrimental to peace and stability.

On his part, Chinese State Councilor and Foreign Minister Wang Yi said ASEAN and China are also working together on regional peace and stability. “China and ASEAN are jointly committed to comprehensive and effective implementation of DOC and exploring flexible ways to advance the COC process.”

“We are seeking to finalize the COC on the basis of consensus building as early as possible to create a set of rules that reflect the region’s characteristics and suit its reality and needs, to effectively uphold peace and stability in the South China Sea,” Mr. Wang added.

Vietnamese Deputy Prime Minister and Foreign Minister Pham Binh Minh said the 10-nation bloc continues to express its concern about the complicated South China Sea situation. “ASEAN and China must ensure effective and fruitful implementation of DOC while continue efforts to work toward a COC that is effective, substantive and in accordance with international law, including the UNCLOS 1982.”

Mr. Minh said that during the 36th ASEAN Summit and now the 53rd Foreign Ministers’ Meeting, ASEAN leaders and ASEAN foreign ministers have reaffirmed ASEAN’s position on the South China Sea that calls for enhancing mutual trust and confidence, exercising self-restrain in the conduct of activities that would complicate or escalate disputes and affect peace and stability, and avoid actions that may further complicate the situation, non-militarization and pursuing peaceful resolution of disputes in accordance with international law.

ASEAN and China have negotiated on such a COC since 2002 with a view to reaching law-abiding rules on the South China Sea, to which Vietnam refers as the East Sea, but the coronavirus outbreak has delayed the talks. The latest meeting for COC talks took place in Vietnam’s Dalat last October when the parties agreed to prepare for the second reading of the COC draft.

Vietnamese Deputy Minister of Foreign Affairs Nguyen Quoc Dung on Monday said that both ASEAN and China are worried about the standstill of the COC talks, but the parties cannot do it online given the complex nature of such a document.

In the meanwhile, both sides have held a few online meetings at working level to discuss ways to resume negotiations and next goals. “We have so far agreed on a number of points on the format and expect that COC negotiations will be resumed soon,” the Vietnamese official tipped. 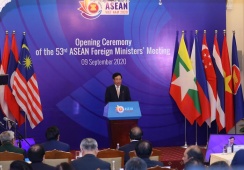