The stair has been a familiar gathering spot of the building’s residents, both the old and the young, after work and school.

There are special stairs in Hanoi called “cultural stairs”, which are not only a mini library set up under stairs but also a community space for the residents. In this sense, the stair of the old apartment building A3, Nghia Tan ward, Cau Giay District is unique.

It is like an open mini library with bookshelves, tables and chairs and books of all genres shelved in different areas such as classics, fiction, non-fiction, history, healthcare, science, law, memoir, among others, as well as newspapers and documents.

Dao Thi Anh Tuan, a resident of the building, has spent many years for voluntarily arranging newspapers and books at the library, helping maintain the reading habit of local residents.

Tuan said before 1999, the stair was the same as that of other old apartment buildings in Hanoi, which was a common space usually for storing, motorbike packing, small business stalls, or other purposes of some individuals.

"Then some retired veterans and cadres living in the building brainstormed an idea to set up a public library there, making it the first special cultural stair in the city," Tuan said.

The idea is aimed at changing the public space into a common cultural area for the community to come to update news and enrich and exchange their knowledge.

"Then we called on the residents to contribute newspapers, books, tables and chairs. Some rules were also issued by themselves to maintain it. For example, every household takes turns to clean the stair daily, peeling off the advertising stickers or erase the graffities. There is also a fund raised by the residents to diversify the book source here," she added.

Tuan said for over 20 years, the stair has been a familiar gathering spot of the building’s residents, both the old and the young, after work and school.

While the young find interesting or useful sources for their study or reading pleasure, elders enjoy reading news and events from daily newspapers. Most of them come here every day not only to update but also share and discuss about news and events together.

In the era of the Internet, tablets and e-readers, the reading culture is still maintained and promoted here, thanks to the “cultural stair”.

Moreover, the stair also serves as an exchange space for people to meet, talk, and share, contributing a large part to tighten the relationship of the different generations, neighbors and the solidarity of the community.

Dam Thi Nhieu, a resident in the building said that the stair was especially important for her, as it gave her opportunities to update information as well as meeting others everyday.

“I hope that we could maintain this stair for a long time as a place, where makes us to have a healthier and happier living,” she said.

From this model, many community activities have been organized such as the weekly cleaning of the whole building, which is participated by all residents, fundraising for people suffering from natural disasters, cooking competitions for women, among others.

The success of the "cultural stair” of A3 apartment has been appreciated and spread to dozens of other neighboring apartment buildings in Nghia Tan Ward. The ward’s authorities have encouraged other buildings to apply the same model and called for sponsorship and contribution of fund and books to support and multiply it in the area.

Nhieu said that people from other wards and districts also visit “cultural stairs” in Nghia Tan Ward. The “Cultural stair" is a small model but it has made great contribution to improving the cultural and non-material life of people and the community.

In the context that the number of new apartment buildings is increasing today and everyone is busy and in a hurry, the model should be spread to other places to help connect the community culture and relationship. 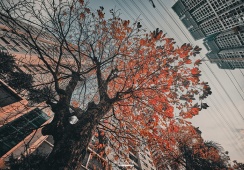 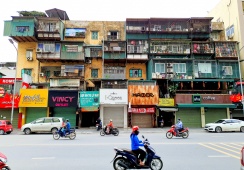 Old apartment buildings in Hanoi: a witness of history and culture