An ancient mansion in Hang Be street of Hanoi, which was built in 1925 by Truong Trong Vong, a famous building contractor in the early 20th century, has become a spotlight in a tour around the city.

This house has been the filming location for several Vietnamese movies including Hanoi in the winter of 1946, Youth, Fall in the Garden, Close Eyes Waiting for Tomorrow, among others. 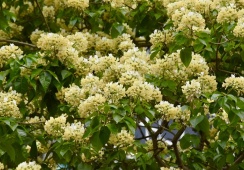