The Hanoitimes - Some large state-owned enterprises are facing difficulties in business valuation, mainly due to complicated financial situations.

The Ministry of Finance (MoF) will finalize legal framework for the restructuring process of State-owned enterprises (SOEs) in the 2021-25 period, focusing on measures to resolve loss-making projects.

This is one of the solutions being proposed by the ministry to speed up the equitization process, which still remains sluggish and far from expectations.

The proposals came after it's reported that only 37 were equitized on the Government's list of 128 must-be-privatised SOEs in 2020, meeting just 28 per cent of the target.

The MoF stressed the necessity to deal with loss-making projects in the 2011-20 period under the market mechanism, including clear responsibilities for those are involved in, as well as specific pathway to put an end to these projects.

“If there is no feasible solution for these projects, related agencies or unit should turn to bankruptcy or dissolution as the last resort,” noted the MoF.

According to the MoF, there should be a strong determination to complete the restructuring process of SOEs by 2025, mainly via privatization or divestment of state capital at SOEs, aiming to keep the state interest intact.

The MoF urged government agencies that are state capital representative at SOEs to enhance their supervising capabilities to ensure efficient enterprise operation.

Based on the actual result of the SOEs restructuring scheme for the 2016-20 period, the MoF would continue to draft a similar scheme for the next five-year period that help state firms to transform comprehensively in terms of finance, workforce, and corporate governance, which are in line with international standards and the government’s visions for certain economic sectors.

To ensure success in the privatization process, the MoF urges leaders of government agencies and provinces/cities to accelerate the submission of privatization schemes of SOEs to competent authorities for soon approval and implementation of subsequent steps.

The slow progress in privatization and divestment of SOEs is attributable to Covid-19, according to the MoF, not to mention a lack of commitment from localities and SOEs in complying with the PM’s instruction for SOE restructuring. 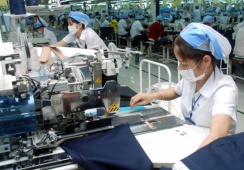