From Hanoi with love

Vietnamese is suffering the most serious ever outbreak of the Covid-19 pandemic and the lockdown. However, in the toughest time, Hanoi has been seen with a lot of love and sharing.

After more than a month of social distancing in Hanoi, many people have been facing difficult situations, especially the poor and those who are self-employed and homeless.

Under these circumstances, many voluntary individuals and groups have lent them a helping hand. “Hanoi - Helping each other during the pandemic” and “Food Aid” are reliable and humane Facebook addresses that the needy people look for.

Nguyen Phan Huy Khoi, founder of “Hanoi - Helping each other during the pandemic” has recently delivered two tons of rice from donors to the Vietnam Fatherland Front Committee in Dong Da district. The rice is given to 200 needy people in the area.

Khoi also publicizes phone numbers of the group’s board members so that people can contact them if they have not yet received support from local authorities. Immediately, an unemployed shipper with his mother on dialysis who just moved to the area, contacted him to get some necessities, which were very timely and meaningful to them.

“After reading some news about people in the difficult situation in my zone as well as others in Hanoi, I contacted with the district’s authorities to offer my support,” Khoi told The Hanoi Times, “To me, like my friends and group members, volunteering is as natural as breathing, especially when more and more people have to struggle due to the pandemic.

We got to know each other in social pages for sharing the same vision of building up a a caring and trustworthy community that helps connect and share.”

“Hanoi - Helping each other during the pandemic” has more than 64,000 members, who are businessmen, doctors, journalists, teachers, artists, scientists interested in social activities.

The group works in close coordination with donors, the local authorities and the Red Cross to support people. They have raised about VND461 million (US$20,300) and sent 29 tons of rice, nearly 925 boxes of noodle, 2,000 bottles of cooking oil, two tons of peanuts, among other food, to nearly 3,000 people.

Having the same warm heart, Chung Nhi, a resident in Nam Tu Liem District, found Cuu tro luong thuc (Food Aid) Group to help those in need who live to her, after she discovered the newly launched function Zalo Connect of Zalo app, which allows people to seek help from the community for food, medicine, necessities and volunteer individuals and groups to find people in the difficult situations in their area.

After one month, the group raised about VND200 million ($8,800) in cash, including the largest donation by an individual of VND20 million ($880), according to Nhi. “With the donation, we bought approximately 18 tons of food to give to some 6,000 people. Our shippers worked very hard until midnight to deliver food to the people timely,” she told The Hanoi Times.

In fact, many shippers of the group have made dozens of trips a day. Many packages were weighing up to 120kg.

“Hanoi has lengthened the social distance time, resulting in the increase of food shortage among poor people. If the situation gets worse, people’s movement would be controlled more strictly and at the time, possibly even shippers would be ban from traveling in the city. Therefore, I try my best to deliver food to people as much as possible at the moment,” Nhi said.

Thanks to it, Tran Hiep Duc, a student from Hai Phong City, who got stuck at home and could not get support from his family, received food timely.

“The group shows that there are many kind people in this world who are willing to help others. This encourages me to think positively and overcome this difficult time,” he stated.

Along with food, hundreds of landlords have reduced or exempt the rental for thousands of people this time. One of them is Nguyen Xuan Thong, a resident in Ha Dong District.

He offers poor people not only free rooms but also free meals. “Social distancing is hard for everyone. I feel very sad to see people sleeping on the street. Working in the real estate sector, I also struggle this time but my situation is better than them. So, I think if I don’t share something with the community now, then when?” he questioned.

“So, I publish my personal information for those in need to contact for accommodation and food, giving priority to women with kids, the elders, people under medical treatment, and students. When the quarantine is over, people can stay for a few more days to have time to prepare to return to life,” Thong stated.

One of Thong’s guests, Nguyen Xuan Cuong, from Thai Binh, came to Hanoi to work as a motorbike taxi driver only 10 days before the city's lockdown.

He said at that time he did not have much money and could not go back to his homeland. “I was really lucky as I met Thong and got his support timely. I’m very grateful to him,” he said.

Now all of her places are full, accommodating families with kids and students who live nearby and now are unemployed or run out of money for rent. She also called on women in the same neighborhood to donate and cook 100 free meals every day for people working hard under the heat at checkpoints controlling people’s movement.

“I hope my small contribution could help reduce the economic pressure for low-income workers in this difficult period,” she told The Hanoi Times.

The lockdown has plunged many people into a difficult situation, especially freelance workers such as motorbike taxis, street vendors, scrap collectors, students or people under long-term medical treatment. But Hanoi always opens its arms to them, making these difficult days become the days of sharing and love. 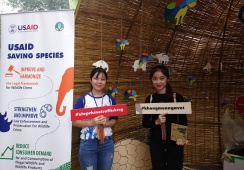 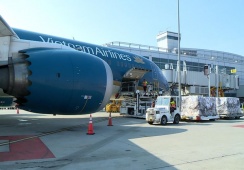 Overseas Vietnamese in US donates 6.2 tons of medical supplies to homeland