Equality sometimes does not come from the big thing, but it comes from harmony, listening to understand feelings, emotions and desires from both sides.

The 2021 International Women’s Day (March 8) is to honor and praise female people but for Hoang Thu, a 29-year-old successful women working for a Hanoi’s bank, it is another year of pressures. She still felt anxious about this though the event ended two days ago.

She continued receiving many wishes of being a beautiful woman, an excellent wife and a careful mother as well as an outstanding employee from men. However, behind her success are hours struggling with children and working her fingers to the bone for her company without sparing a moment for herself.

Thu said that she herself was aware of gender equality, but the awareness of women alone is not enough. The whole society, especially men, should be aware about it too.

“I wish March 8 is no longer the only day of the year to commemorate the cultural, political and socio-economic achievements of women as well as enhancing women's rights. Men need to change their mindset and share  housework and childcare with women,” she told Hanoitimes.

Dr. Vo Duc Anh, a Vietnamese math teacher, shared his story about why the majority of Vietnamese men haven’t shared unpaid work such as housework and childcare, which are considered as the burdens for the Vietnamese women. Especially, half of female friends/students told him that they really hate the Lunar New Year - the largest traditional holiday because they had to cook and wash dishes all the day during Tet.

“The men often feel shy when they do such the unpaid work,” Duc Anh said.

As society is changing, the number of Vietnamese women holding leadership positions is increasing, and their voice against gender inequality is stronger.

This made both women and men in Vietnam feel pressured to change the mindset on gender equality.

Overseeing a large number of female employees  for years, Dang Hoa Nam, Director General of the Department of Child Affairs, Ministry of Labor, War Invalids and Social Affairs (MOLISA), understood the women's feeling, adding that honoring women is good but sharing work and household activities with them is even better.

Nam talked passionately about his personal experience on gender equality in both his family and at work, when he was a boy, an adult and then, a father of two girls as well as currently, a director. Every role he took during his life brought him a new approach on the concept of gender equality.

He said that one factor identified as undermining men's confidence to become involved in gender equality is the lack of positive male role models in society and the media. “Fears that engaging men in gender equality strategies that hinder the empowerment of women may act as an additional obstacle,” he added.

To spread out his message about gender equality, Nam and Duc Anh have joined in the Swedish initiative #globalguytalk and is calling upon men and boys to actively share their experiences of everything from love and sexuality to self-esteem and vulnerability.

Initiated by the non-profit foundation Make Equal, in 2016, the “guy dinner” started from the idea that the dialogue about gender equality needs to be owned by men not only by women, then in cooperation with the Swedish Institute, it goes international and becomes #globalguytalk.

At the opening launch of #globalguytalk on March 8, the Swedish embassy in Hanoi, in collaboration with the Vietnam Women's Museum, introduced the initiative in Vietnam with the aim to give men the chance to participate in conversations, which are about how norms and expectations form them, and how they can contribute to creating a more equal society.

The overall objective of gender equality aim to a society, in which women and men enjoy the same opportunities, rights, and obligations in all spheres of life. One part of achieving that is for men to understand their chance to be a part of positive change and to reflect on their own situation, according to the Swedish embassy in Hanoi.

“My belief is that it is necessary for a healthy family relationship that men talk to each other and overcome prevailing patriarchal mentalities of not sharing emotions,” Swedish Ambassador Ann Måwe told Hanoitimes. “We hope the initiative is an interest of men. We will launch a few of such the events in Hanoi and Ho Chi Minh City, then rural areas.”

For his part, as a partner of #globalguytalk, Nam expected that along with the development of Vietnam economy, gender equality will be achieved, but in Vietnam, it takes time. He believes that the country would only succeed through the participation of both women and men, to achieve equality in society.

Vietnam is on track to develop in all aspects, including gender equality. Many Vietnamese men have begun to realize that in order not to be left behind in the new development context, they need to be more involved in promoting gender equality with women, sharing pressures and chance for success in life.

They need to remove stereotypes and discriminatory mindset and behavior deeply rooted in culture and society to build Vietnam into a developed country by 2045 as set out by the government. 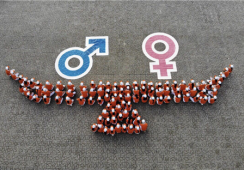