Germany wants to step up its strategic partnership with Vietnam, a country with huge economic potential and growing political status on the world stage, according to Andreas Michaelis, state secretary of the Germany Federal Foreign Office.

Germany fully supports the Vietnam – EU relations, as well as the ratification of the EU – Vietnam Free Trade Agreement (EVFTA) and the EU – Vietnam Investment Protection Agreement (EVIPA), which were signed in June, said Michaelis in a meeting with Deputy Prime Minister and Minister of Foreign Affairs Pham Binh Minh on December 5.

At the meeting, Minh said Vietnam gives priority to its strategic partnership with Germany, expecting close ties in all spheres, particularly trade and investment.

Germany is currently Vietnam’s largest trading partner and the fourth largest investor among the 28 EU members.

Minh expected Germany along with other EU countries to accelerate the ratification of the EVFTA and the EVIPA, saying they would bring mutual benefits to all parties involved.

Minh thanked Germany for its official development assistance (ODA) for Vietnam, which has been contributing significantly to the country’s socio-economic development.

The Deputy PM stressed the bilateral relations would continue to grow in 2020, especially as the two countries will celebrate 45th anniversary of establishment of diplomatic relations, while Vietnam would serve as ASEAN chair in 2020 and Germany would take over the EU presidency in the second half of 2020.

Earlier, Michaelis and Vietnam’s Deputy Minister of Foreign Affairs To Anh Dung jointly chaired the fifth meeting of the Vietnam – Germany Strategic Management Group, in which the two sides drafted a Vietnam – Germany action plan for the 2019 – 2021 period. 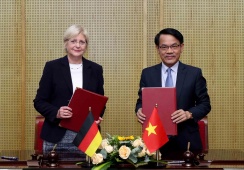 Hanoi willing to cooperate with Germany in sustainable agricultural development