The Hanoitimes - The satisfaction of enterprises and citizens is the gauge of Hanoi’s governance.

Five years since the start of Program No.08 of Hanoi Party Committee on administrative reform in the period 2016-20, Hanoi has achieved significant results with 25.4% of administrative procedures being trimmed off, exceeding 0.4% of the target, contributing a big part in the capital city’s socio-economic development.

“Out of 15 criteria set in Program No.08, Hanoi has exceeded two targets, including the rate of online public services and the simplification of administrative procedures,” said Director of Hanoi’s Department of Internal Affairs Vu Thu Hai.

For three consecutive years, Hanoi stayed in the second place nationwide in the 2019 Public Administration Reform (PAR) index with a combined score of 84.64%, slightly up from 83.98% in 2018, while the Hanoi’s Satisfaction Index of Public Administration Services (SIPAS) continued to record a good result in 2019 with score of over 80%.

In 2019, seven out of eight sub-components of the PAR Index recorded higher average scores compared to last year, except for the “Evaluating of impacts of administrative reform to citizens, organizations and socio-economic development indicators at localities”.

“Hanoi gives strong priority to further improving the city’s scores in both PAR and SIPAS indexes, effectively making the satisfaction of enterprises and citizens as the gauge of the city’s governance,” she noted.

“From a total of 316 administrative procedures in Gia Lam district, 35 have been simplified with shorter processing time,” Mrs. Yen added.

Chairwoman of Bach Khoa ward People’s Committee Hoang Thi Tuyet Lan said following the Program No.08, the rate administrative requests processed on time or ahead of schedule in the locality has always been maintained at 100%.

There has been a monitoring system in place to check the working progress of local authorities in complying with instructions of the central government, Prime Minister, and city’s leaders.

At the same time, Hanoi continues to tighten disciplines of public servants, strictly punishing violations when working with the citizens and enterprises.

Among measures to boost the administrative reform, Hanoi is encouraging its citizens to use public online services, a key step to build e-citizens and a smart city in the future, while evaluating the satisfaction of citizens and enterprises towards the quality of public services at the city’s 22 departments and 30 districts. 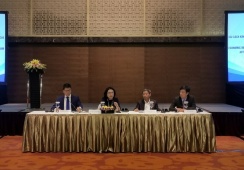 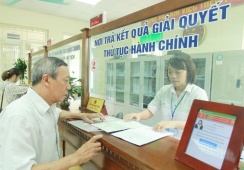 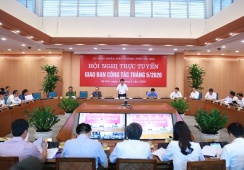