Hanoi aims to be a sci-tech hub of the country: City Party chief

The Hanoitimes - In the period of 2021 – 2025, Hanoi aims to develop science, technology and innovation as a major driving force for the city’s socio-economic development.

Hanoi has been making efforts to become a sci-tech hub of the country, Kinhtedothi.vn quoted Secretary of the municipal Party Committee Vuong Dinh Hue as saying at a meeting with the Ministry of Science and Technology on July 14.

Hue said that the meeting aims to enhance cooperation between the city and the ministry in directing and managing science and technology activities and innovation for the benefit of the city's development and contribute to that of the whole country.

Becoming one of Vietnam’s largest science and technology centers is an obvious goal to match Hanoi's role as the national political administration and one of the country's five major socio-economic hubs, the municipal Party chief noted.

He expressed his hope that the Ministry of Science and Technology and related ministerial agencies will support Hanoi’s efforts to become the country's innovation center and Southeast Asia’s hub in a number of fields.

For his part, Vice Chairman of the Hanoi People's Committee Ngo Van Quy reported that in recent years, sci-tech activities have made important contributions to the capital city’s socio-economic development.

Hanoi has affirmed its role as a national leading hub for science, technology and innovation, evidenced by its investment potential and results in sci-tech activities, Quy said.

He added that scientific research and technological development in Hanoi have become ever more innovative and effective. The mechanism for managing sci-tech tasks has been renewed and improved.

In the period of 2021 – 2025, Hanoi aims to develop science, technology and innovation as a major driving force for the city’s socio-economic development, Quy stressed. 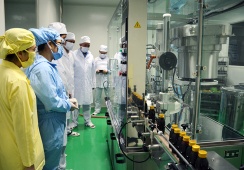 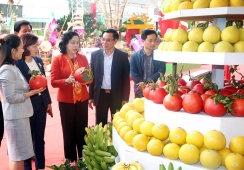