The Hanoitimes - Hanoi’s air quality index (AQI) measured at 10 monitoring stations in the city was in the range of from 111 to 161.

Air quality in the latest 24 hours in Hanoi has been back to the unhealthy level after improving some days ago, according to the Hanoi Agency of Environmental Protection (AEP).

On November 16 afternoon, the AEP said that Hanoi’s air quality index (AQI) measured at 10 monitoring stations in the city was in the range of from 111 to 161.

Other areas had AQI below 150 such as Thanh Cong, Trung Yen 3, Hoan Kiem, My Dinh. The area with the lowest reading was Tan Mai (111). Hanoi’s air quality back to unhealthy level on November 15 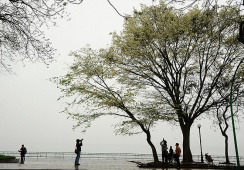