The Hanoitimes - The city has got new facelift with colorful flowers and flags. All people are ready to ensure safety for the largest political event of Vietnam.

Vice Chairman of the Hanoi People's Committee Chu Xuan Dung told Hanoitimes about the city’s facelift and preparation work to welcome the National Party Congress, which will be held from January 25 to February 2 at the National Convention Center, Hanoi.

How has Hanoi been carrying out decoration and communication activities for the upcoming National Party Congress?

The 13th National Party Congress is a great event of the country and an important political activity of the Party and entire people. Therefore, Hanoi has been actively responding to it under the central-level direction, especially in carrying out visual propaganda and promotion activities. Until now, the city has completed the preparation work.

The city has also proactively planned and implemented a visual promotion program with more than 60 large posters, about 8,000 banners and national flags. Tens of thousands of national flags have been hung across the roads, central areas and alleys in all the districts. We consider this event to be the largest ever, where local residents show their hearts towards the major event of the country and to welcome the delegates attending the Congress.

What's the highlight in communications activities for the Party Congress?

In addition to the involvement of the government, the highlight of the work is the active participation of local residents in apartment buildings and residential groups. Led lights are also used to display phrases and messages to welcome the 13th National Party Congress. The city has also completed the installation of flowers and ornamental plants, as well as carrying out environmental sanitation to ensure the green, clean and beautiful landscape of the city.

How did the city plan to ensure safety for the congress in the context of the complicated development of Covid-19 outbreak?

Hanoi has actively implemented the prevention and control of Covid-19 to ensure absolute  safety for the upcoming Congress. In particular, more than 4,000 delegates to the Congress and staff serving the Congress will be tested for Covid-19 twice. So far, the first tests have returned negative results.

The city will strongly follow the instructions of the government and the city. We will focus on mobilizing people to participate in the work of preventing and detecting illegal entries, checking public areas, commercial centers, and gathering places. The measures aim to ensure safety for people during the Congress and the Lunar New Year holiday as well.

Thank you for sharing with Hanoitimes. 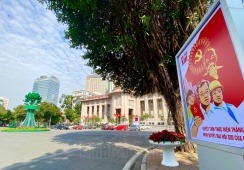 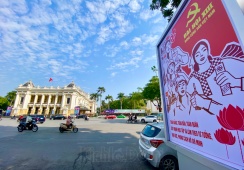