Satellite urban areas are the nucleus to promote suburban development, with its own, unique and mixed functions to support Hanoi city’s downtown.

Hanoi needs to focus on completing transport infrastructure to connect five satellite urban areas with downtown and create a strong boost for socio-economic development in these urban areas, Kinh Te & Do Thi quoted Deputy Director of the municipal Department of Transport Vu Ha as saying.

According to the master plan of transport in the capital city to 2030, with a vision to 2050 approved by the prime minister, one of Hanoi’s key tasks is to develop the five satellite urban areas, including Hoa Lac, Son Tay, Xuan Mai, Phu Xuyen, and Soc Son.

The five satellite urban areas are the nucleus to promote suburban development, with its own, unique and mixed functions to support Hanoi city’s downtown.

Over the past years, the city has spent about VND7 trillion (US$302.5 million) per year to build and upgrade roads, with the priority given to suburban traffic infrastructure.

Mr. Vu Ha said that Hanoi's achievements in the development of transport infrastructure in recent years were thanks to the municipal authorities’ guidance and local residents’ support.

“To quickly complete the synchronous transport infrastructure network for the five satellite urban areas, Hanoi needs to be very flexible in the financial mechanism as well as in mobilizing investment capital,” Mr. Vu Ha said.

Sharing the same view, transport expert Phan Truong Thanh said that the city’s budget allocation should focus on the main thoroughfares which can connect numerous localities, the capital region, and urban railway, among others.

Besides, Hanoi should pay attention to step by step completing the network of intercity bus stations in the area inside Ring Road 4 since these are important traffic hubs connecting the city’s downtown with the five satellite urban areas and neighboring provinces and cities.

Many experts believe that, along with investment in roads, Hanoi should have an effective mechanism to attract financial resources for its metro lines, especially the ones connecting with satellite urban areas, Mr. Thanh added. 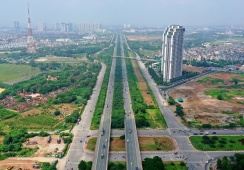