The route is expected to reduce traffic congestion on downtown heavily transited roads in Hanoi.

Hanoi is studying lengthening elevated Ring Road 2 from the Nga Tu So intersection to the Cau Giay intersection, Kinh te & Do thi quoted the Hanoi Transport Construction Investment Project Management Board as saying.

Accordingly, the extension will be of the continuation of the elevated section from the Nga Tu So to Nga Tu Vong intersections.

It has also been included in the list of infrastructure projects by the Hanoi Department of Transport to be carried out in the 2021 - 2025 period.

Currently, the project has been researched and completed by the consultants to report to the municipal Department of Transport. The route is expected to reduce traffic congestion on downtown heavily transited roads in Hanoi.

Earlier, on November 9, the elevated Nga Tu So - Nga Tu Vong section, which is only for cars, was opened to traffic. However, the route has appeared to go against the expectation over the past few days.

The flow of cars from the elevated section that ends just right before Nga Tu So stop lights creates congestion on Truong Chinh street in rush hours.

According to transport experts, traffic congestion at Nga Tu So can be reduced if elevated Ring Road 2 is lengthened by about four more kilometers until Cau Giay district.

When completed as planned, the traffic infrastructure system is expected to significantly solve the traffic congestion in the capital city. 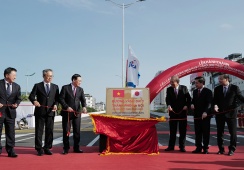 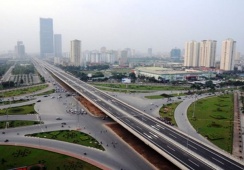 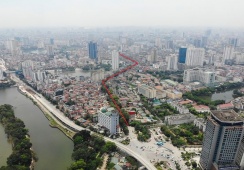