The Hanoitimes - Hanoi’s police is required to actively foil any plot against the national security and social disorder.

Hanoi’s Police on January 20 deployed forces to exercise security plans for the 13th National Congress of the Communist Party of Vietnam.

The deployment will serve the political event which will take place in the city from January 25 to February 2.

During the congress, thousands of Hanoi’s police will be on duty all day and night.

At the launching reremony, Sen. Lt. Gen. Bui Van Nam, the Deputy Minister of Public Security asked Hanoi’s police to actively foil any plot against the national security and social disorder as well as fire fighting. 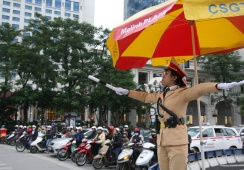