Hue made the demand at the two-day meeting with the Thang Long- Hanoi Heritage Conservation Center and related departments and sectors about conservation projects of Thang Long Imperial citadel and Co Loa ancient citadel on February 23.

He urged experts and practitioners to focus on analyzing objective and subjective reasons from policies to execution, that hampering the conservation works.

According to Party Secretary Vuong Dinh Hue, the central area of Thang Long Imperial Citadel and Co Loa Relic are all considered as valuable assets of Hanoi city.

Since being honored as a world cultural heritage, the Thang Long Imperial Citadel has implemented 7/8 of the Government's commitments to UNESCO such as: introducing the heritage widely to the public, especially among youth; expanding archaeological research, building a plan for long-term exploitation and management of the area, however, most of the relic restoration projects has yet been deployed.

Hue mentioned the rebuilding of Kinh Thien Palace at the Thang Long Imperial Citadel as a major task in the time to come.

According to Deputy Minister of Culture, Sports and Tourism Hoang Dao Cuong, the restoration of Kinh Thien Palace is very important, however, it needs to take a carefully architecture research first before implementing other restoration steps.

Prof. Dr. Luu Tran Tieu, Chairman of the National Cultural Heritage Council, gives the example Hue ancient capital as a royal architecture, which can be referenced for the restoration of Kinh Thien Palace.

"The Hanoi Party Committee hopes that within the next five years, there must be a fundamental change in fulfilling the government’s commitments with UNESCO regarding Thang Long Imperial citadel restoration," Mr. Hue emphasized. 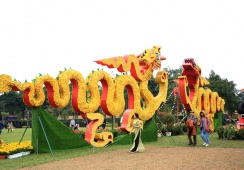 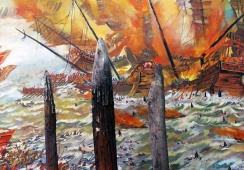