The Hanoitimes - Since 2009, the Hanoi government has supported more than 100 rural industrial establishments to invest in renewing machinery and technology.

Notably, the city has supported craft villages to apply advanced and modern machinery.

According to a representative from the Hanoi Department of Industry and Trade, most rural industrial establishments in the city are now small-scaled and apply backward technologies.

Due to the small scale, most of them are short of financial resources to invest in machinery, innovate technologies and products, leading to their poor competitiveness and becoming labor intensive.

Since 2009, the city has supported more than 100 rural industrial establishments to invest in renewing machinery and technology, which have successfully improved product quality and output, reduce environmental pollution and better met customers’ demand.

Chairman of the Hanoi People's Committee Nguyen Duc Chung said that craft village production is expected to account for about 8.5% of the total value of industrial and handicraft production by 2020.

Besides, the city will treat environmental pollution in 50 seriously polluted craft villages, upgrade infrastructure for another 50, create stable jobs from 800 thousand to one million rural workers with an average income of some VND40 million (US$1,720)/person/year, Chung added.

In order to achieve the targets, the municipal government will implement a spate of policies to facilitate handicraft villages and enterprises, so that they can effectively contribute to the capital city’s economic development and social security. 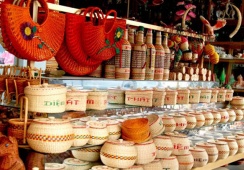 Every craft village in Hanoi to receive US$8,600 for environmental impact assessment