The newly-appointed director is expected to make great contribution to the city's socio-economic development.

Do Anh Tuan was appointed as new Director of the municipal Department of Planning and Investment for the 2021-25 tenure.

Speaking at the appointment ceremony held in Hanoi on February 25, Deputy Secretary of the municipal Party Committee Nguyen Van Phong said he believed Tuan will bring into full play his competence and experiences to successfully lead the Planning and Investment Department in attaining the targets set for the department, making it deserve to be a key unit for the socio-economic development of the city in the coming time.

At the ceremony, Tuan pledged to do his utmost to fulfill all the assigned tasks. Born in 1971, Tuan replaced Nguyen Manh Quyen, who is currently Vice Chairman of the Hanoi People’s Committee.

Tuan held the position of the Secretary of the Party Committee and Chairman of the People’s Council of Tay Ho district in Hanoi. 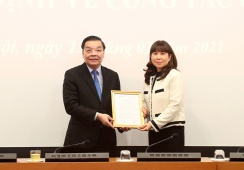