The Hanoitimes - The independent consultant will assess the quality of water intake and calculate production costs of waterworks.

The Hanoi government will hire an independent  consultant to evaluate the pricing of clean water, and aims to phase out underground water extraction to avoid land subsidence, VnExpress on November 22 quoted Secretary of the municipal Party Committee Hoang Trung Hai as saying.

Hai said that the independent consultant will assess the quality of water intake and calculate production costs of waterworks.

"After the results are made available, the Hanoi People's Committee will consider and decide on the water rate," Hai said.

Hai added that currently underground water makes up half of Hanoi's water intake, thus, the city will have to increase the use of surface water as waterworks' input to avoid land subsidence in the long term.

Giving an example, the secretary of the municipal Party Committee said that the Mekong Delta sinks 0.4 centimeters per year due to extraction of underground water for agriculture and aquaculture. "Hanoi has not sunk because its ground is firmer than the Mekong Delta’s, but we should be wary,” Hai said.

Earlier, at a meeting on November 15, Chairman of the Hanoi People's Committee Nguyen Duc Chung said that the Hanoi government had not decided on the price of water supplied by a company with input from the Duong river.

The mayor stressed that the municipal government had consulted with the Ministry of Finance and the rate of VND10,246 (US$0.44) per cubic meter of water is preliminary, not the charge that end users have to pay.

The Hanoi mayor affirmed the safe water pricing has been transparent and implies no murky interests. The municipal government creates all favorable conditions for investors to timely supply clean water for the city’s residents.

A representative of the Hanoi Department of Finance also said that the principle for clean water pricing of all plants in the city is fair. However, water plants use different technologies and investment amounts, which would ultimately lead to different costs. 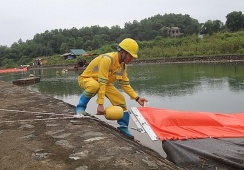