The Hanoitimes - Educator Chu Van An has been a symbol for the traditional fondness for learning of the Vietnamese people, as well as efforts to overcome difficulties in the pursuit of knowledge.

A ceremony to mark 650th death anniversary of Vietnam’s eminent educator Chu Van An (1370 - 2020) was held at the Temple of Literature in Hanoi on November 20 evening.

The ceremony is part of a series of event honoring one of Vietnam’s most respected educators, which are jointly held by the UNESCO and local government.

At the ceremony, delegates paid tribute to the ancestors and educator Chu Van An at the Temple of Literature.

Renowned educator Chu Van An was born in 1292 in Van Thon village, now part of Thanh Tri district in Hanoi. He is widely known for his dedication to the humanistic education philosophy, regardless of the wealth and status of his students. One of his key teachings was learning should go hand in hand with practicing and learning is a lifetime undertaking.

Notably, Chu Van An was one of Vietnam’s first teachers that opened his own school that nurtured many talents to the country. Under the reign of King Tran Minh Tong (1314-1292), he became a teacher at the imperial academy and was responsible for teaching the crown prince, who was later crowned as King Tran Du Tong.

Later, he resigned and returned to his home village because King Tran Du Tong refused his request of beheading eight other mandarins who he accused of corruption. For the rest of his life, Chu Van An continued his teaching career and wrote books. He died of illness in 1370.

An altar was erected in his honor in the Temple of Literature in Hanoi, where he is revered.

His thoughts and wisdom not only left a lasting legacy on Vietnamese education, but also contributed to promoting national humanistic values. Chu Van An’s educational perspective features a number of progressive values considered to be similar to the UNESCO’s four pillars of learning which are learning to know, learning to do, learning to live together, and learning to be humans.

Chairman of the Hanoi People’s Committee Chu Ngoc Anh said over the course of history, educator Chu Van An has been a symbol for the traditional fondness for learning of the Vietnamese people, as well as efforts to overcome difficulties in the pursuit of knowledge.

UNESCO Chief Representative in Vietnam Michael Croft said following the footstep of educator Chu Van An, education should be seen as a life-long process that is essential for the sustainable development of individuals, families, communities and the whole nation. 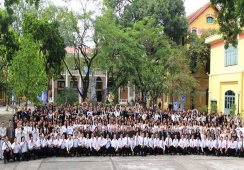 Hanoi expo in commemoration of scholar Chu Van An underway