The National Center for Hydro-Meteorological Forecasting (NCHMF) has forecast heavy rains in Hanoi until August 5, with the rainfall ranging between 150 – 250mm from August 1-3.

The rains are the consequence of a tropical storm that is set to make landfall on Vietnam’s northern delta and Thanh Hoa province tomorrow evening (August 2), said Mai Van Khiem, director of NCHMF at a meeting today [August 1].

Within today, the tropical depression could intensify into a tropical storm with powerful winds of level 8 and gusts of level 10.

The Hong Kong Observatory said once entering Vietnam, the storm’s center position could pass by Thanh Hoa province bordering the southern area of the Northern delta.

Minister of Agriculture and Rural Development Nguyen Xuan Cuong said the rainfall as a result of the storm could go up to 500mm, posing risks to people living in those areas.

The NCHMF expected rainfall of 400 – 500mm in provinces from Thanh Hoa to Quang Tri, and over 250mm in Hue and Quang Nam.

Cuong requested related provinces and cities and agencies to support and ask to boats to quickly return to safe areas.

Deputy Prime Minister and Chairman of the Central Committee for Natural Disaster Prevention and Control Trinh Dinh Dung urged local agencies to focus on protecting people’s lives and assets as the storm is coming in.

According to Dung, the most important issue would be to move people out of dangerous zones.

How many storms will Vietnam face in 2019? 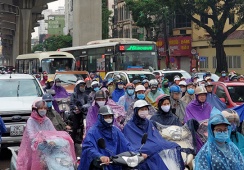