The Hanoitimes - The Hanoi Party chief attributed these achievements to contributions of people from all walks of life, including Christians.

Secretary of the Hanoi Party Committee Vuong Dinh Hue wished the Evangelical Church of Vietnam (North) a merry Christmas and a beautiful New Year filled with health, happiness and success.

Hue was speaking at a meeting with the Evangelical Church of Vietnam (North) delegation led by Pastor Nguyen Huu Mac on December 3.

He attributed these achievements to contributions of people from all walks of life, including Christians, and stressed that the city will continue with efforts in improving people’s living standards.

Noting that there will be numerous important political, economic, cultural, and diplomatic events in the city by late-2020, the Party chief expressed his hope that the Evangelical Church of Vietnam would continue promoting their spirit and responsibility for building the capital city into a friendly, safe and attractive place.

For his part, Pastor Nguyen Huu Mac expressed his gratitude to the Hanoi Party Committee, the municipal People's Council and People's Committee, Vietnam Fatherland Front Committee of Hanoi for their support, creating favorable conditions for the Evangelical Church of Vietnam in recent years.

He wished Hanoi to achieve more achievements under the leadership of the municipal Party committee in the new term. 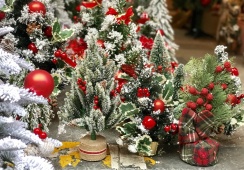 Hanoi overwhelmed of colorful lights and vibrancy during Christmas Eve