Hanoi metro’s safety evaluation expected to be completed in December

The Ministry of Transport will strive to complete safety evaluation and hand over to Hanoi’s authorities the Cat Linh-Ha Dong route urban railway project, the first of its kind in the city, by late December, Kinh Te & Do Thi quoted Minister of Transport Nguyen Van The as saying at a governmental meeting on October 28.

The minister said around ten French experts in charge of the safety assessment of Cat Linh-Ha Dong urban railway project would tentatively arrive in Hanoi by mid-November.

Meanwhile, China Railway Sixth Group, the EPC contractor, will try to complete the conditional acceptance for the metro line and the Ministry of Transport will make every effort to put the project into commercial operation before the National Party Congress begins, scheduled to take place in the first quarter of 2021, Mr. The said.

He added that the Chinese contractor has imported 99% of equipment needed for the project, and their installation is now 97% complete. However, the contractor has not provided all safety certificates for equipment installed and the consortium tasked with safety evaluation has not been able to complete the job.

The Ministry of Transport has proposed that the consortium, comprised of French firms Apave, Certifier and Tricc, grant the project a temporary safety certificate so it can start commercial operations soon.

Apave-Certifier-Tricc said earlier this month that a complete evaluation could take another six months, which means the line will not become operational until next year, even though Prime Minister Nguyen Xuan Phuc has set a year-end deadline.

PM Phuc suggested that ministries and Hanoi city must spend more time handling the remaining issues, especially, the safety of the Cat Linh-Ha Dong urban railway, which is a political task that the investor and Hanoi city must attach special importance to.

Work on the Cat Linh-Ha Dong metro line began in 2011 and was originally scheduled for completion in 2013. But several hurdles, including loan disbursement issues with China that were only resolved in December 2017, have stalled it for years.

The line eventually entered the testing phase in March with all 13 cars carrying out trial runs on both lines. The ministry wanted commercial operations to begin at the end of April, but this deadline too was missed.

Project costs have more than doubled from the original VND8.8 trillion (US$378 million) to VND18 trillion (US$774 million), according to state auditors. 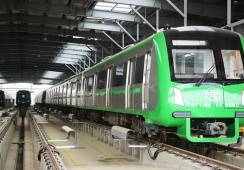