The Hanoitimes - The plan is to supply water from the Red river to improve quality of water in To Lich river which is severely contaminated for years.

Hanoi is considering channeling the Red river's water through a system of pumps to flush out polluted sludge from one of its former tributaries, To Lich river.

The plan is to supply water from the Red river, which flows from Yunnan Province in Southwest China through northern Vietnam to the Gulf of Tonkin, to improve quality of water in To Lich river which is severely contaminated for years.

Director of the Hanoi Management Board of Projects on Water Supply, Drainage and Environment Nguyen Van Hung said that the city has many plans, including the plan to replenish the To Lich river with Red river’s water via West Lake. However, through the field survey, the concerned units have decided to recharge the To Lich river with Red River river via Lien Mac sewer.

"Some routes have been built on the system in accordance with specialized plans, if approved by the municipal government, this plan will bring many benefits," Mr. Nguyen Van Hung said.

To Anh Tuan, former director of the Hanoi Department of Planning and Architecture, said that the scheme is nothing new compared to the previous ones and actually this idea was mentioned nearly 40 years ago.

"The scheme of pumping the Red river’s water must prove its advantages in terms of cost, social and environmental impacts," Mr. Tuan said.

Besides, it is necessary to consider plans to exploit the To Lich river to raise cultural and landscape values after they are cleaned," he added.

Mr. Dong Minh Son, the former deputy chairman of Hanoi, said residents of the city outskirts have been complaining for years that water from the To Lich river and several other branches of the Red River from the inner-city was so polluted that they could not be used for irrigation.

"Pumping water from the Red river to the To Lich river in an attempt to wash away pollution was a necessary initiative, but for long term, the city needs more comprehensive solutions to deal with the environment of its rivers and lakes," Mr. Son said.

The To Lich river used to be branches of the Red river. However, due to historical changes, they are no longer naturally connected to the river. Urbanization and climate change in recent years have led to water shortage and pollution in the To Lich river.

Over 200 sewage outfalls discharge 150,000 cubic meters of untreated wastewater every day into To Lich river, according to the city Department of Natural Resources and Environment.

The river runs 14 kilometers through the downtown districts of Thanh Xuan, Hoang Mai and Thanh Tri and has become infamous for its stench and blackish water.

Currently, rain is the only source of natural water supply for the river.

Hanoi city has piloted a host of measures to revive its To Lich river which is dying due to heavy pollution and massive accumulation of mud in the river bed, including the application of Japanese and German technologies. Initially, positive results had been seen on the river thanks to these technologies; in particular, the river’s bad smell has been reduced and oxygen level in the river’s water has been raised. 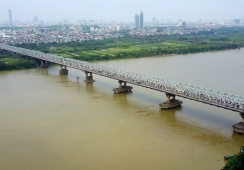