Hanoi's leaders have vowed to maintain strict measures due to concern about community transmission.

Hanoi on Wednesday proposed Prime Minister Nguyen Xuan Phuc extend the social distancing period for the city by two more weeks until the end of April.

Hanoi made the proposal on the last day of the two-week nationwide social distancing period ordered by Prime Minister Nguyen Xuan Phuc.

The city’s proposal was made in a request by Secretary of the Hanoi’s Party Committee Vuong Dinh Hue on April 15.

Hanoi attributed the proposal to the complexity of the pandemic in the city with some cases of longer-than-expected incubation period (more than 14 days), relapsing, and high ratio of suspected cases.

As of April 15, Hanoi has confirmed 113 infected cases, of them 51 have recovered and been discharged from hospital, according to the city Steering Committee for Covid-19 Prevention and Control.

Currently, the city has a village of more than 11,000 residents put on lockdown. So far, 12 villagers have tested positive for the new coronavirus.

Meanwhile, Hanoi Kidney Hospital and a commune in the outlying district of Thuong Tin are at high risk, involving hundreds of people.

Hanoi’s leaders have vowed to maintain precautionary measures and strict implementation of social distancing to contain the virus spreading.

The city’s Party chief Vuong Dinh Hue ever said that it’s necessary to implement the government's social distancing policy like a wartime order. He emphasized that nothing rather than strict implementation of social distancing could be the best way to mitigate damage caused by the pandemic.

Meanwhile, Chairman Nguyen Duc Chung of the Hanoi People’s Committee has repeatedly talked about the importance of preventive measures such as quarantine, large-scale testing, and zoning of high-risk areas to stop the spread of the virus. He has been emphasizing the danger of community transmission that has appeared in the city.

In a related move, 24 cities and provinces nationwide, Ho Chi Minh City included, have proposed extending the nationwide social distancing campaign by two more weeks, till the end of April, according to the National Steering for Covid-19 Prevention and Control. 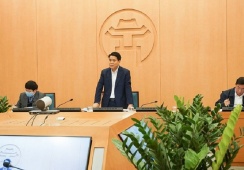