Since early February, Hanoi’s top leaders have planned to buy vaccines for the locals.

Authorities in Hanoi have proposed the Vietnamese government’s authorization for purchasing Covid vaccines for its residents.

The government should grant mechanism to enable cities and provinces nationwide to buy vaccines for the inoculation in their localities, Deputy Chairman of the Hanoi People’s Committee Chu Xuan Dung said at a government meeting on February 24 chaired by Prime Minister Nguyen Xuan Phuc.

Two days ago, the municipal Department of Health has sent a request to the Ministry of Health for the purchase of 15 million doses of vaccines with an aim to administer to the city’s residents at the age of 18 and above.

With the proposal, Hanoi expects to provide vaccination to 95% of its population.

According to Deputy Director of the Hanoi’s Department of Health Hoang Duc Hanh, the Covid-19 pandemic in Hanoi is temporarily under control but risk of transmission remains high as roughly 85% of confirmed cases were asymptomatic carriers.

"It means that only testing help detect infections which requires efforts," Hanh said.

A plan to buy vaccines came in early this month when Secretary of the Hanoi Party Committee Vuong Dinh Hue asked local authorities to build a roadmap for it. Finance for the purchase will come from the city’s budget and other financial sources.

Since the resurgence of SARS-CoV-2 in Vietnam late January, Hanoi has reported 34 cases. Local experts attributed Hanoi’s virus containment to massive testing and contact tracing. The city has set up 10,000 Covid-19 prevention and control groups to sort out people from affected areas and keep surveillance on them. So far, it tested more than 51,000 people coming from Hai Duong, the epicenter of the fresh wave. 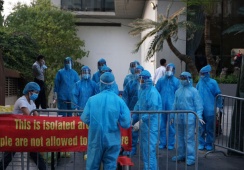 Hanoi students may return to school from next week