Hanoi ranks 2nd among localities in the numbers of Bluezone downloads

The Hanoitimes - Bluezone is a Bluetooth-based app that helps determine whether or not a person has come into contact with a Covid-19 patient.

Hanoi, after Danang city, is the second locality in the country in terms of Bluezone downloads out of nationwide total mobile subscribers with nearly three million as of February 17,

according to statistics from the Department of Computerization under the Ministry of Information and Communications (MIC).

More than 29 million people in Vietnam have downloaded Bluezone as of February 18, compared to 12 million in 2020, the Department of Computerization said.

Bluezone is a Bluetooth-based app that helps determine whether or not a person has come into contact with a Covid-19 patient.

If a user is positive for coronavirus (known as person F0), health authorities can identify those who are exposed that person (known as F1), and the system will alert them about the risk of infection.

They will be also provided with instructions on contacting health authorities for assistance.

The app is completely confidential, keeping anonymity of users, and transparent, as it only stores data on the user’s phone and does not transfer user’s information or reveal their locations to the system.

Bluezone's effectiveness was proven when it helped the medical agency track thousands of people who had close contact with an infected person or a suspected case.

Thereby, the larger the community of Bluezone users is, the lighter the workload of the front liners in the anti-pandemic battle, said health authorities. 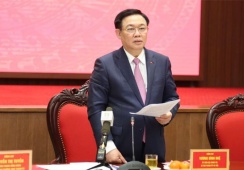 Hanoi tests all returnees from Covid-19 hotspot of Hai Duong