Hanoi city has saved over VND13,000 billion (US$558 million) by streamlining the administrative apparatus in the 2016-2020 period, Kinh te Do thi newspaper quoted Secretary of the Hanoi Party Committee Vuong Dinh Hue as saying at a meeting on April 9.

The city has reduced the proportion of current spending over total budget expenditures from 58.8% (in 2016) to 51.2% (in 2020), sparing more space for the wage reform and increasing resources for investment in socio-economic development, Hue said.

He appreciated all bodies and sectors for their timely proposals and models for trimming payroll.

After the renovation, performance of the administrative apparatus was improved. The quality of administrative procedure handling has been enhanced and basically met the task requirements, even in the difficult situation such as Covid-19 pandemic prevention.

Regarding the key tasks for the second quarter of 2020, the municipal Party chief requested the key officials to focus on reviewing and removing obstacles and solving pending issues.

"The renovation of organizational structure and staff streamlining must be associated with the effective implementation of scheme on job titles and positions," Hue noted.

For his part, Chairman of the Hanoi People's Committee Nguyen Duc Chung said that the capital city had effectively implemented organizational structure renovation and staff streamlining.

On the basis of such reforms, Hanoi is one of the leading localities in the country to reduce the proportion of current spending, Chung added. 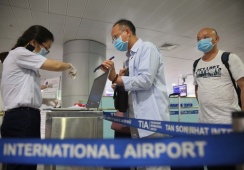