The Hanoitimes - Hanoi intends to use the proceeds for two urban railway routes costing a combined US$4.6 billion.

Hanoi is seeking the National Assembly (NA)’s permission to use proceeeds from the divestment process of state-owned enterprises (SOEs) to finance two urban railway projects, according to Nguyen Duc Chung, chairman of the city governmenmt.

The combined book value of remaining SOEs subject to privatization in Hanoi is estimated at VND25 trillion (US$1.07 billion), while the city has so far raised VND11 trillion (US$474.25 million) in proceeds from stake sales of SOEs, Chung said at an NA meeting on June 1 discussing the draft resolution to pilot special finance-budget policies for Hanoi.

The amount has not been transferred yet to the State Capital Investment Corporation (SCIC), the Vietnamese government’s investment arm.

Once given the NA’s approval, Hanoi would use the proceeds for two new urban rail projects , including the Hanoi station – Hoang Mai line with investment capital of VND40 trillion (US$1.72 billion) and the Van Cao No.5 – Hoa Lac line worth VND66 trillion (US$2.84 billion).

The two projects are set to be submitted to the NA for approval in October.

Chung said these two projects are entirely funded by Hanoi’s budget, in which part of the fund would come from the SOEs privatization process, around VND15 trillion (US$646.49 million) from the city’s budget and issuances of municipal bonds.

The NA’s Finance – Budget Committee agreed for Hanoi to keep 100% proceeds from SOE divestment and privatization in the city.

Vice Chairman of the NA Phung Quoc Hien noted the purpose of concept of such expenditures must be agreed by the municipal People’s Council.

Meanwhile, projects with investment capital of over VND10 trillion (US$431 million) must be approved by the NA, Hien added.

A report from Hanoi’s Department of Planning and Investment showed that the city’s public disbursement target remains unchanged at VND37 trillion (US$1.56 billion) in spite of potential losses in state budget revenue on the Covid-19 crisis.

According to Hanoi’s leaders, public investment remains a key solution for the city to boost economic recovery in the post-Covid-19 period. 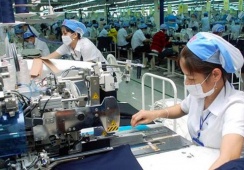