The Hanoitimes - Quick test kits made by South Korea will be used at the stations and they will show results after 10 minutes analyzing blood samples.

The Hanoi city government has decided to set up 10 quick Covid-19 testing stations for mass testing around Bach Mai Hospital, which has become a serious coronavirus hot spot in the city, local media quoted Chairman of the Hanoi’s People Committee Nguyen Duc Chung at a meeting on March 30.

Quick test kits made in South Korea will be used at the stations and they will show results after 10 minutes analyzing blood samples, Chung said, adding that the Hanoi Center for Disease Control received 5,000 such test kits from the Ministry of Health on March 29 to conduct the testing immediately.

Hanoi has invited South Korean experts to design 10 makeshift test stations in accordance with the World Health Organization’s standards. Each station has an area of ​​3x3 meters and equipped with wifi and testing equipment.

The testing stations has been set up initially around Bach Mai Hospital where 33 coronavirus infected cases have been detected. After that, the city will expand quick testing to other hospitals. Ten working groups, each comprising army, police and medical staff, will be established to carry out the task.

Quick test on a large scale will early detect and quarantine infected people timely and prevent Covid-19 from spreading, according to the Hanoi mayor.

He warned against a high risk of community transmission after the first coronavirus infections at Bach Mai Hospital, one of the largest in Vietnam, were detected a week ago.

The number of confirmed cases linked to the hospital is expected to keep rising as more than 5,000 patients released by the hospital and their relatives have gone home in the northern and central provinces.

Testing begins on March 31, with priority given to those visiting the hospital recently and those living nearby.

Hanoi reported 84 infection cases as of March 30, of which 27 have been cured and 57 under treatment. Those in severe and critical condition have shown positive signals. 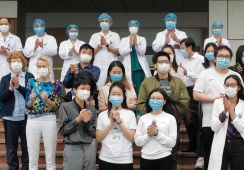