The Vietnamese delegation won the most gold medals (15), which is the best achievement in the four years participating in the International Mathematics and Science Olympiad.

Vietnamese students bagged 15 gold, 14 silver and seven bronze medals at the 16th International Mathematics and Science Olympiad (IMSO 2019), the Hanoi’s Department of Education and Training announced at the closing ceremony in Hanoi on November 30.

"Last year, I only won a silver prize in maths, thus I feel very happy because my performance improved this year since I won not only the gold medal in science but also earned the highest score," Minh said.

Expressing his delight with Vietnamese delegation’s achievements, Director of the Hanoi Department of Education and Training Chu Xuan Dung hoped that IMSO 2019 would not only help students solve difficult problems but also ignite their passion for maths and science in the future.

The Vietnamese delegation won the most gold medals (15), which is the best achievement in the four years attending the IMSO. Thailand ranked second with ten gold medals, Singapore and China came next with six and four gold medals, respectively, followed by Sri Lanka, Malaysia and the US with one gold medal each.

The IMSO is an annual competition for students under the age of 13 worldwide to promote their interest in mathematics and science. Its 16th holding from November 27 to 30 was host in Hanoi for the first time.

This year's competition gathered 1,725 participants, including 719 contestants as well as 293 international experts, teachers, and observers from 24 countries and territories.

Under the theme "Thinking – Innovation – Outstanding Skills", the participants competed in two tables. Table A had 369 candidates from different countries and territories, including the US, Bulgaria, Singapore, South Korea, Iran, Malaysia, Thailand and Indonesia. Table B included 367 candidates from 22 towns and districts of Hanoi.

For maths and science in Table A, candidates participated in three parts: Theory 1 (60 minutes, fill in the answer sheet), Theory 2 (90 minutes, detailed explanations on questions), Maths discovery and Science practice (120 minutes, complete detailed answers). The test must be done in English. Contestants were not allowed to use calculators, computers or any materials. Candidates in Table B took only two parts of theory.

The previous edition of this contest was held in China in 2018 with the attendance of over 400 students from 22 countries and territories. Vietnam sent 23 students to the contest with twenty of them from Hanoi and all the 23 contestants garnering medals. 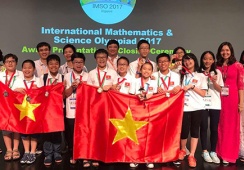 Hanoi to host IMSO for the first time