The Hanoitimes - The smuggled goods have a total value of approximately VND800 million or around US$34.400.

Market watch forces on December 29, 2020 found a large batch of smuggled goods in an apartment in Long Bien district of Hanoi.

At the warehouse apartment, market watch force seized 73 cigarette burners; 8,070 e-cigarettes and 3,043 vapes worth the total value of approximately VND800 million or around US$34.400.

At the same time, the owner of the goods couldn’t prove the legal origin of the batch and claimed that he is selling mainly to young people with an average price of VND300,000-400,000 (US$13) for a piece.

According to functional units, the transactions of e-cigarettes are conducted mainly on Facebook, and those who buy vapes are youth and teenagers. In order to promote sales, e-cigarette is usually advertised as being harmless or helping quit smoking. Illegal goods are usually kept in warehouses that located deep in alleys to conceal from the functional forces.

Market watch authorities said the case will be investigated further and smugglers will be sanctioned according to the current law. 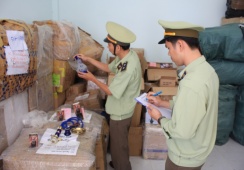