The Hanoitimes - Hanoi’s first metro line is one of the key public transport projects in the capital city.

The Vietnamese government has drastically requested the Hanoi Metropolitan Railway Management Board (MRB) under the Ministry of Transport to complete the safety test run of Hanoi’s first urban railway project, the Cat Linh-Ha Dong line, by the end of this year, Kinh te & Do thi reported.

The government is also focusing on removing financial difficulties for China Railway Sixth Group - the EPC contractor and the French consultancy Apave-Certifier-Tricc (ACT) consortium to carry out the safety evaluation and remaining tasks as soon as possible.

A recent report sent the National Assembly stated that the government will urge the relevant units to complete the safety certification and the overall handover in accordance with regulations within the first quarter of 2021.

According to the Ministry of Transport, the safety evaluation carried out by ACT has not made much progress. The Chinese general contractor has not provided manufacturers’ certificates, technical documents, test results or not conducted a full evaluation of the field tests. Therefore, ACT has not been able to complete the safety assessment due to insufficient grounds for independent consultancy.

ACT has come up with a solution that they will conduct field validation during the last 20 days of operation and emergency situation drills.

Accordingly, personnel to operate the railway line will be ready by October 27. The company will sign labor contracts and provide uniforms to all employees. Operation training will start from November.

The Cat Linh-Ha Dong metro line is one of the key public transport projects in Hanoi. Since September 2018, this project has tested all 13 trains, with an average speed of 35 kilometers per hour.

The railway is 13.5 kilometers long from Cat Linh Station in downtown Dong Da district to Yen Nghia Station in the southwestern Ha Dong district and uses standard-gauge rail track (1.435mm). The designed speed of the track reaches 80km/h and with a train frequency of two minutes.

Work on it began in 2011 and was originally scheduled for completion in 2013, but loan disbursement issues with China that were only resolved in December 2017 and other problems have stalled it for years.

Construction was completed in December 2019, and the original cost of US$553 million spiked to more than US$868 million. 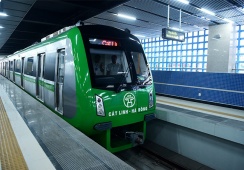