Locals in the North and South of Hanoi could enjoy two large-scale shopping mall projects of Lotte Mall Hanoi and Aeon Mall Hoang Mai, which will come into operation in the 2023-2024 period.

A recent report on the real estate market from CBRE suggested there should be new supplies to Hanoi’s retail floor space following nearly a year of low market activity.

“The new retail spaces would be concentrated on the suburban areas,” it noted, adding locals at the North and South of Hanoi could enjoy two large-scale shopping mall projects of Lotte Mall Hanoi and Aeon Mall Hoang Mai, which will become operational in 2023-2024 period.

In addition, the report predicted a positive year for the retail market given the emergence of recovery signs in late 2021.

“This was evident with a sharp increase in the number of visitors at shopping malls, as well as rising consumer spending,” noted the CBRE.

Meanwhile, the entry of new fashion and cosmetics brands, as well as the expansion of major ones have also been positive news for Hanoi’s retail market, added the report, referring to names such as Dyson, Sandro & Maje among new brands joining the capital city market in the previous quarter.

CBRE suggested the recovery of retail revenue would have positive impacts on the retail space rental market in the coming months, especially as restriction measures on Covid-19 continue to be lifted and the acceleration of a vaccine booster campaign nationwide.

In the fourth quarter of 2021, the ground and 1st floor asking rents (excluding VAT and service charges) at shopping malls surrounding Hanoi’s downtown remained on the declining trend, averaging US$24 per square meter per month, down 0.2% against the previous quarter and 3.3% per year.

According to CBRE, this was because the owners of some projects with high vacancy rates are looking to keep hold of customers and support them against the Covid-19 impacts.

Statistics revealed the vacancy rate in suburban areas was 16.8%, rising 1.8 percentage points against the previous quarter and 4.3 percentage points year on year, with the rate of shopping malls in districts of Long Bien, Nam Tu Liem, or Ha Dong going up to 40-45%.

The ground and 1st floor asking rents in the downtown area increased slightly to $106 per square meter per month, up 3% on quarter but down 1.9% year-on-year.

The vacancy rate, however, rose by 13% on average, up 2.4 percentage points quarter on quarter and down 1.4% year on year. Hanoi's housing market set to heat up in 2022 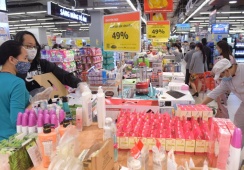