The Hanoitimes - This is the second time Vietnam National University in Hanoi (VNU-Hanoi) has been included in the world’s 801-1000 group.

Vietnam National University in Hanoi (VNU-Hanoi) has been listed in the world ranking of 801-1000 universities in 2021 for a second year running, VnExpress reported, citing Times Higher Education (THE) results released on September 2.

Accordingly, this is the second time the VNU-Hanoi has been included in the world’s 801-1000 group, and it is also the only educational institution in Vietnam in the 1,000 group.

Besides, VNU-Ho Chi Minh City and the Polytechnics University of Hanoi are representatives of Vietnam in the 1001+ group. This ranking by THE announced the world’s 1,527 leading higher education institutions.

In Asia, Tsinghua University (China) is placed among the world's top 20, Peking University ranked 23rd and the National University of Singapore ranked 25th. In Southeast Asia, the University of Malaysia is the best, and is ranked in the group of 301-350.

Universities in the region that have a similar ranking to that of the National University of Hanoi (Group 801-1000) are King Mongkut Thonburi Technical University (second in Thailand) and Universiti Tenaga Nasional (fourth in Malaysia).

Moreover, the VNU-Hanoi is included in the group of 101-150 in the ranking of 50 young QS universities for the first time in 2021.

THE is one of the world's most reputable and influential independent education rankings, alongside that of QS and Shanghai Jiaotong University (China). 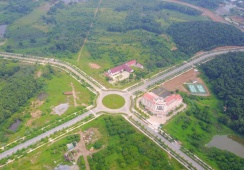